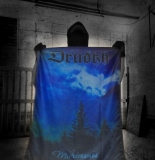 Selvmord, which translates to “suicide,” was Vond’s 1994 full length and was originally released as a limited edition LP by the now-defunct Dutch label Necromantic Gallery. “We included a razorblade with the 20 first copies,” Mortiis said, adding with a morbid sense of humor that “there have been no suicides that we are aware of.” That version of the record has been sold out for two decades. It was released in CD format by various record labels.
Lieferzeit: 3-4 Tage
14,99 EUR
inkl. 19 % MwSt. zzgl. Versandkosten